Startup Marketing – why it is not enough to have an innovative idea? 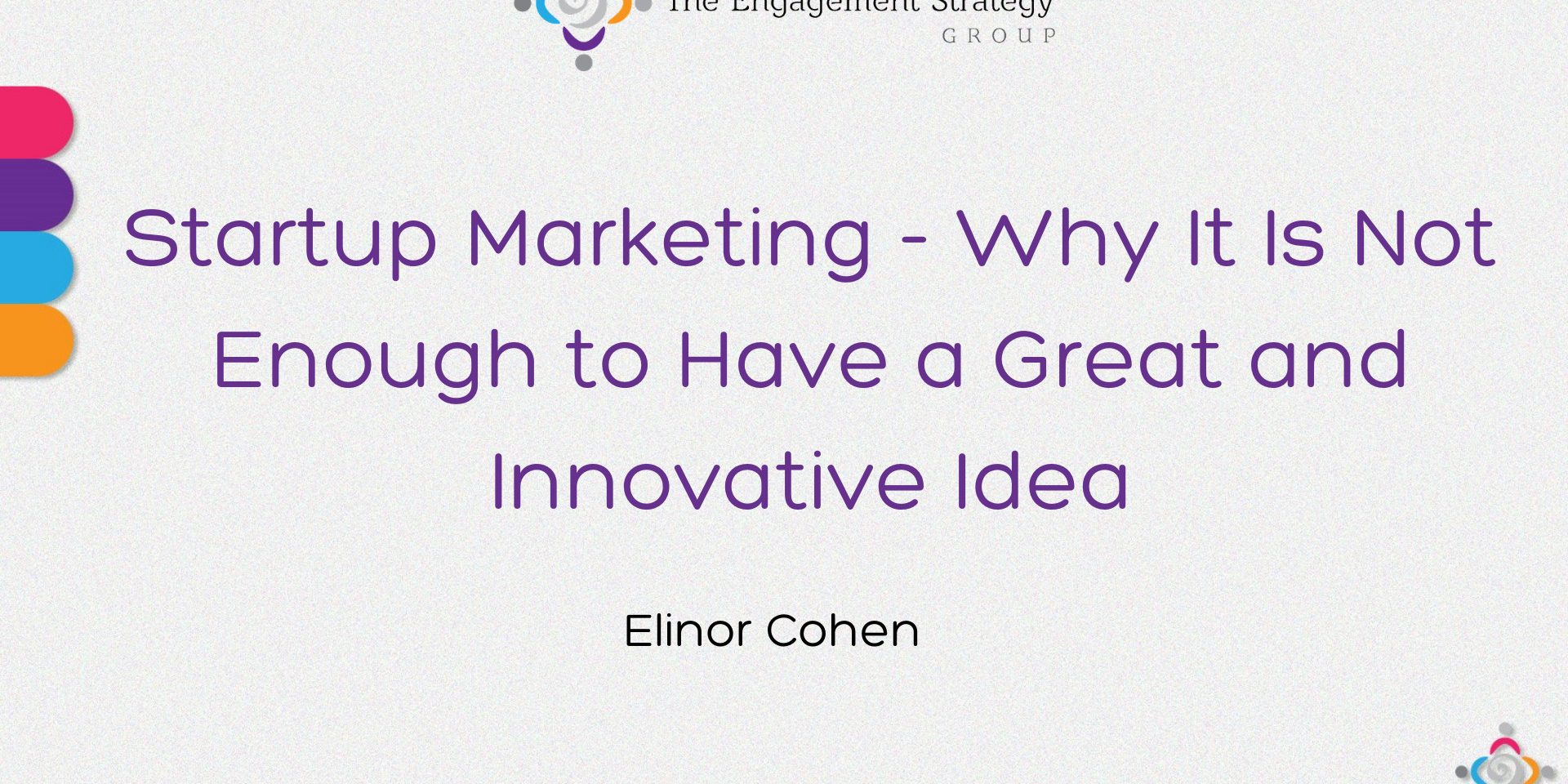 The above is the title of my most recent talk given at the Digital Marketing Europe 2021 conference.

I decided to “write up” my talk as a post for the benefit of our readers because I think it’s important, especially in light of the latest pandemic year+ that we’ve all been experiencing with everything going online and digital.

As I said at the beginning of my talk, “Marketing is marketing” (whether digital or not and whether you market a startup, or a unicorn). So why “Startup marketing” as the focus? Well, because throughout my career both as working for (employed) startups and as working with (consulting) startups or mentoring them I have come across well over 100 of them and I noticed a worrying trend. In many cases, if the founding team is mostly or all technical (developers, engineers, scientists), while they may have some understanding of marketing and its importance, they usually have zero awareness of it.

In other words, the more startups became trendy, the more digital and technological this world became and the younger the founders became, the more I encountered startups that literally and single-handedly killed their potential often before it began, by their approach (or lack thereof) to marketing.

The main question that my talk focused on was a “chicken and egg” issue: When is the right time to start marketing?

I also ran the same poll live as I was giving the talk to an audience of, well, mostly marketing people 😊

Here are the results:

From my initial surveys

From the live session

While most replies were what I expected (as soon as I have an idea), there was a significant percentage of answers that refer to marketing as second or even third to initial proof of concept (POC), funding or even a fully commercial product. This is the trend I was seeing in my work and this is worrying.

The next question I tried to tackle is: Is there such a thing as “too much” (and therefore “too little”) marketing?

And the answer is of course – yes there is.

To put it simply, setting out on the entrepreneurial journey without a proper plan, a marketing strategy, is like setting out on a hike without a map and a clear idea of where you’re headed.

I am well aware of the “startup life cycle” stages and yes, securing funding (and often having a POC to show potential investors) is a crucial early step. But what most founders forget, or do not realize, is that you actually “market” to your investors to get that funding. If you play your cards right and “market” to potential collaborators you may even save on resources (money, time, energy) as you build that POC. In effect, whether you like it or not, you are marketing from day 1. You’re just doing it towards different entities and in different methods or “amounts” with each milestone.

At least this is what you should be doing.

So how DO you get your marketing right?

Well, you treat it like a prescription from a doctor. Just like with medicine you get, you have instructions on how much to take, when to take it and how, so with your marketing prescription. It needs to be done at the right time, in the right amount and in the right way.

Marketing is not a single standard paradigm. It is a multi-layered methodology that needs to be planned in advance. The speaker that went before me at the conference, Donnie SC Lygonis, had a very interesting and accurate metaphor. He said that nowadays a startup founder is not a CEO  – Chief Executive Officer, but rather a Chief Executive Director. And by “Director”, Donnie meant director of a movie.

But before you can direct a movie you need, first and foremost …. A script! You have no movie to direct without a script. Your marketing strategy is your script. It needs to be written down and laid out before you write a single line of code. If not, you will end up creating a product that doesn’t necessarily fit the market, or you will end up having an awesome product but no resources or time left to market it.

Marketing is literally the “make or break” of a business. Throughout the years we’ve all witnessed average products selling like hotcakes and good products being buried. It therefore absolutely has to be the first thing on your mind when you wake up in the morning with a new startup idea.

You need to be ready to market all the time, to different entities and people, you need to know where you are going and where you want to end up in 1 year, 3 years, 5…10 years.

And then, you need to be flexible enough and ready to pivot and change in an agile manner.

Is it easy? Trivial? Not at all. But it is not impossible!

How to toggle LinkedIn Private mode on an off and what are the consequences
January 30, 2020

Storytelling – an art everyone needs to master & 2 great TEDx talks about it
August 24, 2017

Engagement Strategy – what it is and why you need it in your marketing
July 1, 2017

Leave your details and we’ll get back to you ASAP!

This website uses cookies to improve your experience while you navigate through the website. Out of these, the cookies that are categorized as necessary are stored on your browser as they are essential for the working of basic functionalities of the website. We also use third-party cookies that help us analyze and understand how you use this website. These cookies will be stored in your browser only with your consent. You also have the option to opt-out of these cookies. But opting out of some of these cookies may affect your browsing experience.
Necessary Always Enabled
Necessary cookies are absolutely essential for the website to function properly. This category only includes cookies that ensures basic functionalities and security features of the website. These cookies do not store any personal information.
Non-necessary
Any cookies that may not be particularly necessary for the website to function and is used specifically to collect user personal data via analytics, ads, other embedded contents are termed as non-necessary cookies. It is mandatory to procure user consent prior to running these cookies on your website.
SAVE & ACCEPT